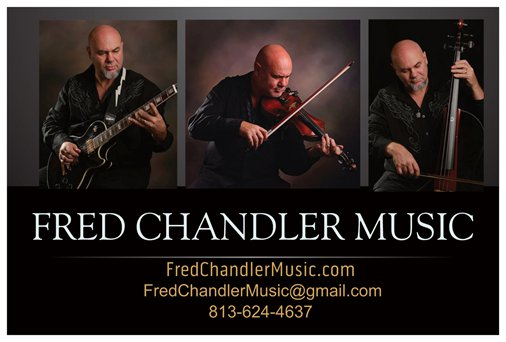 The iconic multi-instrumental, singer, songwriter, producer is legendary for his passion for music and devotion to his craft combined to produce an experience that envelopes the listener's emotions, mind & soul.

Fred will take you soaring to amazing heights with searing, screaming electric guitar, float you along on a melodic tour of your senses with his acoustic 6-string, then change direction and take you by surprise with his modern electric violin, cello, banjo & ukulele, dobro, lap steel and more.

Career highlights include working on stage with Buddy Cage, the peddle-steel player for country rock bands New Riders of the Purple Sage and Grateful Dead Fame; playing violin for the Woodstock 25th Reunion in New York's Catskill Mountains; and, performing on stage at Nashville's famous 3rd & Lindsley venue.  Fred regularly performed at the pre-hockey games downtown Tampa with Steve "Doc" Wacholz, drummer for Savatage. Nicknamed by the Storm cheerleaders, fans and sponsors as "Fast Fingers Freddie" he played Guitar during two seasons of the Storm - Arena Football games in Tampa. You can find Fred with his cello on the amazingly talented SCC, Soul Circus Cowboys Band video "Believe it".  Click the SCC link here: https://www.facebook.com/soulcircuscowboys/videos/1449712491749103/

Fred did a music tour in St. Croix where he fell in love with the Caribbean Island lifestyle and more.

You may have seen Fred with one of his former bands; Skyler Steel, Aquahamer, Mojo Dragonfly, and more

Fred Chandler has been writing and recording music for over 40 years and he has a deep catalog of original music and recordings of his original music.  You can find Fred at Uncle Fats 2 Tampa on Wednesday nights where he hosts a long standing open mic night and serves as a music teacher, mentor, inspiration and friend of music.  He tells everyone - "Go out and be great"  Fred performs out five or six times a week with no two shows being the same.  Fred has no plans to stop any time soon.

Fred Chandler Epicoustic Events Performs his acoustic show all over the Tampa Bay Area and has hundreds of regular performances scheduled.

Fred performed his Acoustic Show at The Hard Rock Cafe for The Tampa Bay Acoustic Music Festival where he was presented with a Dean Guitar and other items for his performance when he opened up for Bret Michaels, lead vocalist for the glam-metal rock band Poison and grammy award winner, Michelle Branch.

"Fred Chandler Epicoustic packed the house and wowed the crowd with his commanding vocals.  Fred is a multi-talented musician who relocated to the Tampa Bay area from Bennington, Vermont. Not only do Fred’s vocals command attention, he plays guitar, violin, viola, cello, mandolin, dobro, and ukulele.  He’s been playing guitar and writing songs for over 40 years!"

"But that voice, that voice! It’s absolutely captivating! Fred performed a set of all original music including “Crystalyne” a song he wrote for a couple getting married about how they met, “Green Flash” a spiritual song about that elusive green flash, “The Arch” a song about a child with leukemia and “Love’s Overture” his own personal “Bohemian Rhapsody”.  In addition to playing solo shows, Fred also plays with The Band 4X and Magnum Opus.  See Fred at Uncle Fat’s 2 in Tampa every Wednesday night or follow his voice here." 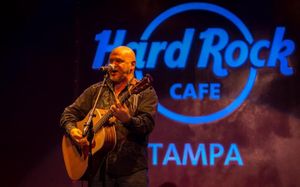 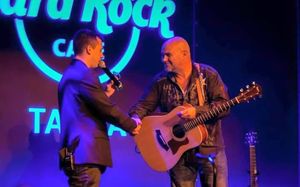 Acoustic Softer Side of Fred - Improvisation at it's finest !

Acoustic - House of the Rising Sun -

Genre:  Arena Rock, Progressive Tinged Music - Like a Concert !  It's a show !

"Magnum opus is one of Tampa Bay's premier bands, having performed all over the area, including Jannus Live in St. Pete. They performed their original song, 'Methuselah Tree,' on Daytime TV." 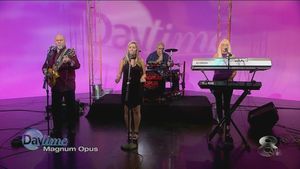 The Fred Chandler exclusive interview with multiple Emmy-award winner and 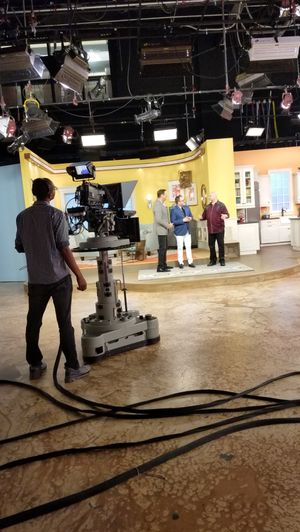 "Because no one else will play it out "

Fred Chandler is the Founder and Band Leader for 4X.  Date Founded May 2014

Congratulations to 4X for being the Battle of the Bands Winners!  4X was selected to Open Up for Skid Row, mainstreams pop-metal band at the Cotee River Bike Fest at Sims Park Amphitheatre October 2018.

Chandler, pictured far left, is the band leader of The Band 4X. 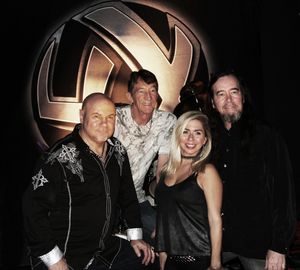 Music and Lyrics Written and Arranged by Fred Chandler

Filmed at a Live Performance at Reef 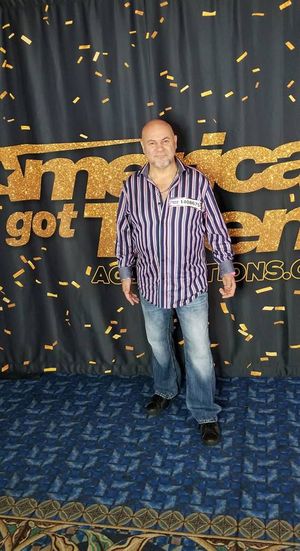 Fred Chandler invited to perform his original music for the AGT Judges! 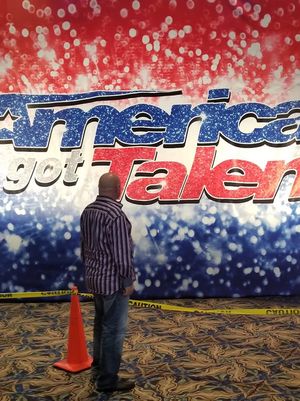 Local Musician dreams of his passion and love for his original music being heard by the AGT America's Got Talent Judges.

Fred Chandler steps out after performing his original music for the America's Got Talent Judges and "says, well that was fun" and he meant every word of it!!! 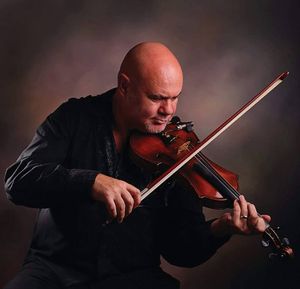 It is why he’s seemingly always working on the craft — whether it be playing in solo and band shows, tinkering with a new instrument, or laying down new tracks in a recording studio.

Sometimes, when he wakes up, he has locked, bloody fingers and a hoarse voice — following a busy week of performances.

His creativity, however, is never the worse for wear.

“If my imagination gets burnt out, then you may as well just throw me to the coroner, because that’s the most enduring part,” Chandler said.

Music means just about everything to the 58-year-old Lutz resident.

He’s been playing guitar and writing songs for more than 40 years, dating back to when he was living in Bennington, Vermont and Saratoga Springs, New York.

And, he has no plans of stopping anytime soon.

“I’ll probably be like Tiny Tim — die twice doing your show,” Chandler jokingly says, referencing the multiple heart attacks the well-known ukulele player suffered during live performances that led to his passing in 1996.

Since moving to Florida 17 years ago, Chandler has become a familiar name in the local music scene— primarily as a rock-and-roll guitar player who’s also gained popularity as a violinist.

He regularly performs at venues all throughout Lutz and Land O’ Lakes, such as Ukulele Brand’s, Craft Life Brewing, Whiskey Willy’s and In the Loop Brewing.

He also hosts a weekly open mic night each Wednesday at Uncle Fats 2, in Tampa.

Over the years, he has opened for such acts as Foreigner, Blake Shelton, Willie Nelson, Blue Oyster Cult, Phish, and many others.

Career highlights include working on stage with Buddy Cage, the pedal-steel player for the country rock band New Riders of the Purple Sage; playing violin for the Woodstock 25th Reunion in New York’s Catskill Mountains; and, performing on stage at Nashville’s famous 3rd & Lindsley venue.

Now a member of two bands — Magnum Opus and The Band 4X — Chandler can be seen at venues throughout the greater Tampa Bay area, including Jannus Live and Skipper’s Smokehouse. And they play everywhere in between Englewood and Crystal River.

Chandler’s groups perform a wide range of original tunes, as well as covers of hit classic and alternative rock songs, plus some modern pop.

Basically, their repertoire includes everything from Kansas to Queen to 21 Pilots.

Often, he performs five or six gigs a week, and no two shows are alike, Chandler said.

He said he tries to put a twist on each performance, with his improvisational skills and deep catalog of songs.

“I like to keep it fresh. That’s why I constantly learn new material,” the musician explained. “I’m not one to just learn a solo from a record and play it at you. I want to play to you. I want you to go, ‘Wow, he was totally on that night. He had something going on.’ The people that come to see our shows get that because they know we’re all just going to kind of play from the hip, from the heart a bit and change it up,” he said.

Chandler’s knack for learning a wide array of instruments has also made him a local fixture.

In fact, it takes two hands to list them all —viola, cello, mandolin, dobro, lap steel, banjo, bass, ukulele and most recently, the saxophone.

“If I own it, I can play it, at least to some degree,” Chandler said.

Chandler also takes pride in his lyrics and songwriting. His subject matter spans everything from love to nature.

“I really want them to say something,” Chandler said of the songs he composes. “I don’t just want to jot down something, just because the music’s good. If I’m going to put lyrics, then it’s got to be dead on.”

Chandler, curiously, draws much of his musical inspiration from his Maltese dog, Olivia Marie, whom he describes as “the best listener in the world.”

He put it this way: “She doesn’t care if it’s disco or it’s a pop tune or if it’s country, she just likes whatever I’m doing. I love that.”

Meanwhile, Chandler’s next big performance is happening later this month.

On Sept. 29, The Band 4X will compete in the Battle of the Bands at Harley Davidson New Port Richey.

It was one of just six bands to earn an invitation. The winner goes on to perform at the Cotee River Bike Fest in October.

For information on Chandler’s music and future shows, visit FredChandlerMusic.com.

"A rock-and-roll guitarist by trade, Lutz’s Fred Chandler has

also gained local popularity as a violinist. In total, he plays

about a dozen other instruments." 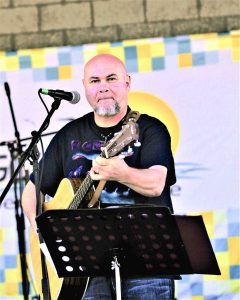 Ranking 8 for his Original Song "Don't Drop the Mic"

Ranking 11 for his Original Song "My Happy Space"

Ranking 22 for his Original Song "Fields of Purple" 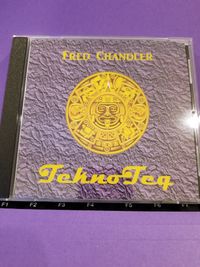 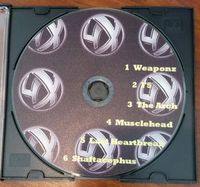 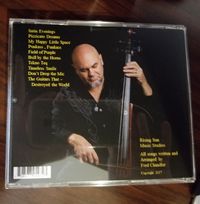 “"Fred Chandler Epicoustic packed the house and wowed the crowd with his commanding vocals.  Fred is a multi-talented musician who relocated to the Tampa Bay area from Bennington, Vermont. Not only do Fred’s vocals command attention, he plays guitar, violin, viola, cello, mandolin, dobro, and ukulele.  He’s been playing guitar and writing songs for over 40 years!" "But that voice, that voice! It’s absolutely captivating! Fred performed a set of all original music including “Crystalyne” a song he wrote for a couple getting married about how they met, “Green Flash” a spiritual song about that elusive green flash, “The Arch” a song about a child with leukemia and “Love’s Overture” his own personal “Bohemian Rhapsody”.  In addition to playing solo shows, Fred also plays with The Band 4X and Magnum Opus.  See Fred at Uncle Fats 2 in Tampa every Wednesday night or follow his voice here." Source - Click here for the Article: https://blog.seminolehardrocktampa.com/casinoblog/tampa-bay-acoustic-music-festival-at-hard-rock-cafe-june-21st/ Article Courtesy of 813AREA - Christine Annis for Seminole Hard Rock Casino Tampa  ”